Main Menu
You are here: Home / Plant Care / Growing Mugwort In Your Garden 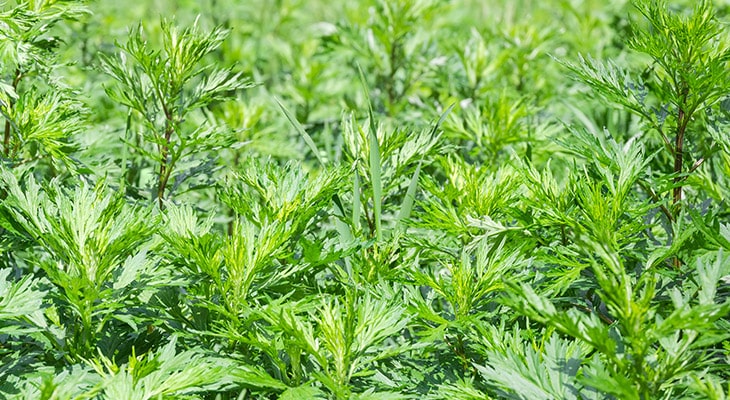 Are you interested in growing mugwort? You are in the right place. This guide will teach you the benefits of mugwort and all you need to know about the cultivation of this herb.

Before diving into the details of growing mugwort, let me first highlight several benefits of cultivating this herb in your garden, as well as a brief history of mugwort and its uses over time.

Disclosure: This page contains affiliate links. This means that the owner of this website might be compensated for any qualifying purchases made via these links.

Mugwort is the common name of multiple species of plants in the genus of Artemisia.

There are several species of mugwort:

Although most people use the name “mugwort” when considering any of the varieties mentioned earlier, it is most commonly utilized as a reference to Artemisia vulgaris.

Common mugwort is indigenous to Europe, northern Africa, Asia, Alaska, and has progressively spread to North America and other regions across the world.

How To Identify Mugwort

Because there are several species of mugwort and some similar weeds, it sometimes might be tricky to identify this plant.

One of the easiest ways to recognize a mugwort plant is by its smell. These plants have a powerful and distinctive sage-like odor when you crush their leaves.

Mugwort is many times confused with wormwood (Artemisia absinthium), a plant from the same genus. Some varieties of these plants can have a similar aspect and smell.

The main difference between these two is that the leaves of mugwort have a dark-green color on the top side and a silvery-white color on the bottom side. Wormwood leaves have a silvery color both on the upper and on the lower side.

Mugwort plants can reach more than 2 m (6ft) in height in the most suitable environmental conditions. These herbs also tend to form dense patches, so finding a single mugwort plant it’s not very common.

If you’re not very good at identifying plants, I recommend you trying out a mobile plant recognition app (I made a list of the best apps here). These apps can help you name many flowers, weeds, and even trees by just taking a photo of their leaves, flowers, bark, or other parts.

Mugwort is a plant with many uses and various medicinal benefits. It has a powerful aromatic smell and just as sage, mugwort has been used for centuries in spiritual ceremonies by the Native Americans to purify or bless places or people, and to banish evil spirits.

This plant is often used to make smudge sticks, in the flavoring of certain beverages and foods, as a pain reliever, as a remedy for indigestion and other gastrointestinal diseases. This herb also has a potent antifungal effect and is highly effective against many types of intestinal parasites. Moreover, it supports the release of gastric juices, which can help optimize digestion and reduce bloating.

Despite its benefits, you need to know that mugwort plants contain a tiny quantity of thujone, a toxin that can lead to involuntary contraction of the muscles. In small amounts, the plant doesn’t contain enough thujone to produce harmful effects to humans. Yet, if ingested in large quantities, it becomes toxic.

Mugwort should not be consumed during pregnancy because it can provoke uterine contractions in pregnant women.

Also, in rare cases, the sap of this plant can cause dermatitis in some people with high skin sensitivity.

How To Grow Mugwort

You can often find this herb in uncultivated areas, along the river banks, near roads, or in many areas where other weeds thrive in harmony. However, if you can’t find it anywhere in your vicinity, then it would be best just to grow it in your garden. It doesn’t need very much care, and because it is a perennial plant, it will regrow the next year.

Be careful, though. Mugwort tends to spread very quickly if you leave it unsupervised. Hence, some view it as an invasive weed in some regions.

Even though a single plant can produce tens of thousands of seeds, this is not the primary way of propagation of mugwort. Instead of depending on seed dispersal for reproduction, similar to bermudagrass, mugwort spreads mainly through modified subterranean plant stems that send out roots and shoots from its nodes, called rhizomes.

Therefore, to be able to keep its spread under control, I would recommend planting it in containers or a more isolated corner of your garden. Also, when choosing the companions of these plants, keep in mind that mugwort produces certain chemicals that can inhibit the growth of some species of plants.

Mugwort is very adaptable to a wide range of climatic conditions. These plants can grow in cold mountainous regions but also in warm temperate areas.

Mugwort prefers growing in dry or slightly moist soil and is a drought-tolerant plant. It can grow in full sun or semi-shade.

Even though there are more ways to propagate mugwort, you can just start growing your first plants from seeds.

The first approach is to grow the seedlings indoors in pots, then transplant them into containers or in the garden in early spring.

What you need to know is that mugwort seeds are surface germinators, so you just scatter them over the surface of the soil and keep them moist until they germinate. Place the pot in a place where the seeds can get enough sunlight since they also need light to sprout.

The second method is to sow the seeds directly in your garden in the late fall to enable them to sprout in the springtime. This approach might result in a lower number of seeds managing to develop plants or to more erratic germination since you cannot control the external climate conditions.

You can typically find mugwort seeds in the stores that sell medicinal herb seeds, or you can simply order them from Amazon.

Besides seed propagation, mugwort can also propagate through stem cuttings. Take cuttings from the stiff, thicker stems in the fall, soak them in a rooting hormone, then plant them in potting soil. These should develop roots within a few weeks and will give birth to new plants.

Mugwort is a highly adaptive herb and can grow in many soil types, including light sandy soils, loamy, or even heavy clays. It best thrives in wet but well-drained soils.

Regarding the best pH level, these types of plants can usually adapt to a wide range of soil pH levels (4.8 to 8.2). Hence, mugwort can grow well in acidic, neutral, or alkaline soils.

Mugwort can be harvested in varying growth stages of the plant, at different times of the year, and in diverse ways, depending on the usage.

Some collect the young shoots in the spring while others harvest mugwort in late summer or early fall (August, September) before the flower buds open.

Most people just cut a portion of the upper side of the stalk from each plant and put it to dry in the shade. Once dried, the plants can be stored and used for various purposes for an extended period.

Growing mugwort is not very difficult. Probably, the most laborious task is to find the seeds and provide them a bit of attention until they sprout. At the point when the plants are already developing, there aren’t too many things you need to do to offer these plants a suitable medium to grow.